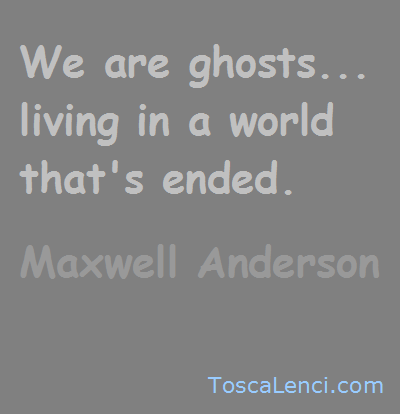 The following is a short one-act play/poem: Escape to Eden: An Allegorical Poem in One Short Act by Tosca Lenci.

We are ghosts…living in a world that’s ended. — Maxwell Anderson

Characters in order of appearance:

A one-act play: Escape to Eden: An Allegorical Poem in One Short Act by Tosca Lenci

Setting: War bunker below ground level; two open lookouts at upper right and left in rear wall. Curtain opens to full blackness, sounds of gunshots and whistling rockets; flashes of battle can be seen outside the lookouts.

Death, Thoughts, Intuition, and Duty, masked and appropriately garbed, wait in wings. All except Death wear capes and hold kite-shields of different designs….

DEATH Voice, out of the blackness—

Commander Brain no longer can be heard above rifle shots of the Emotions. In the trenches Desires lie burning….

Spot on Brain brightens; snarled whisperings of Thoughts begin from surrounding darkness as Death jumps into the light:

THOUGHTS In rising chant from the dark—

Two
…Thousand
…Years
…of WAR—
we refuse to lose brothers and sisters anymore!

DEATH With spotlight on Brain at full-strength, Death withdraws as it finishes speaking:

THOUGHTS One at a time waft into light, circle and address Brain, and return to the dark:

The enemies die so much harder than your will.

Too often!—ignoring Intelligence’s sign, have you allowed Greeds to cross the lines, to wound Friendships….

Aye…buried deep went Hope—for whom even you yet pine! And Charity…. And Patience! They who brought good Deeds back, in time.

To say nothing of the Children Dream, fugitives from your First Nuclear Age,
those that survived, silenced by Rage—

And weren’t you there, when Love was killed?—for saying that one could exist without a body,without being kissed?

Five piercings were too much for Him. Yet over even this deafening din is the lingering Spirit still to be felt—

And still you believe?—that defeat can be dealt the Wandering Thoughts that approach from the east, led by Remorse, a tireless beast who feeds on talents—

While the darts from the Doubts lying low in the south prevent Courage’s venturing out to independence?

As the Minutes keep sailing in from the west? Ah, fiercest of all, relentless Time’s quest, of indifference.

INTUITION Bolts from the dark brandishing a weapon:

I—Intuition!—am forced to erupt: What draught remains within the Cup-of-Significance? There’s but one way, to still the Mind—break off communication from behind….

Silence is our only chance!

DUTY Appears at Intuition’s side:

Yes! Together we might do it, if we tried—annihilate, if we must our own stubborn hide for deliverance.

DEATH Lurking at the edges of light:

[whisper] Now is the time to ambush Brain—while the dreary dream-lulled Senses sleep.

DO IT! UNITE! DRIVE INTO IT DEEP THE LAST LANCE….

Duty joins hold on Intuition’s weapon. Slowly they raise it above Brain….

[Meanwhile, out of sight each Thought has attached to its costume’s cape a wire—part of a pulley assembly to lift capes at finale.]

THOUGHTS In unison, as variously they bend into and out of the light:

Blessed is That which governs the Universe, gives life and sustenance, and has brought us to this happy season….

For in the light of our vision have we have found our freedom….

Warfare beyond the bunker is subsiding—

Weapon reaches its highest point as light on pedestal is dimming….

For Truth is most high—

Thoughts’ chorus crescendoes and ends simultaneously with plunging of weapon into Brain and set into darkness:

An ethereal haze begins to light above as Thoughts emerge one at a time, place shields also over Brain, and then crouch in the darkness. Music grows in strength as Death speaks its final words and capes lift out of sight….

Bury kindly your parent beneath your shield!

Bid farewell to this cemetery on Ptolemy’s wheel!

We are ghosts…living in a world that’s ended. — Maxwell Anderson

Escape to Eden: An Allegorical Poem in One Short Act