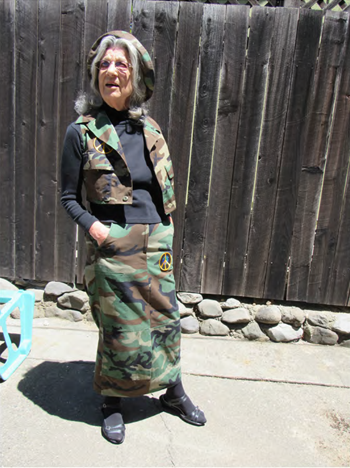 Beginning at a very young age–If you grew up in a tightly-financed lower middle-class home, as did the producer of this website–when there was something extraneous that you wanted you either made it or found a job (like babysitting) that enabled buying it.  For me, sewing was a money-saver– both as a teenager and throughout marriage and motherhood years.   But last year, age 79, this Domestic-Self believed she had given up sewing:  fingertip ridges were all but gone; she had to be looking at needle and thread to know she was holding them!  Then, alas, she was presented with a project that would be her swan song (idiomatically, a final performance or accomplishment; etymologically, loan translation from German Schwanengesang: that a mute swan sings before dying).

The project was born thus:  a son-in-law, honorably discharged from a long military career, was left with a large number of surplus uniforms.  (FYI, military clothing for basic training–paid by the government through vouchers– is kept by a service man upon leaving service.)  Sorting items for disposal, Domestic couldn’t help but notice their fabric’s incredible durability and perfection of stitching. 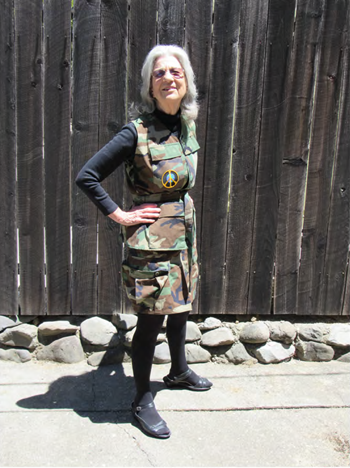 And that was where the old family saying, Waste Not, Want Not, took prisoner of dyed-in-wool Seamstress- Mind.  Besides prudent recovery of taxpayer money by recycling original costs of uniform fabric and production, the resulting garments, embossed with peace symbols, reflect the pride and honor deserved to all who serve keeping peace and protecting all that we hold dear.