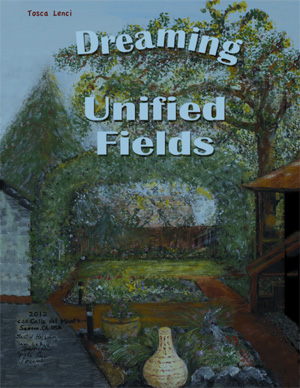 More and more the field of Physics is begging a revolutionary unifying model, and I wonder. Will one eventually gel? If so, will it be anything like that which for over three decades I have envisioned? While telescoped time usually confers a specific enlightenment to one named person; in truth, scientific revelations culminate thought and work through many unacknowledged lives.

Naturally I’d be curious, if able, to know after death whether my simple efforts will have been in concert with the next milestone in Physic’s tale, or naught but a crackpot theory (which latter I shall be happy not to learn!). If my thinking was misconceived, more curious, however, is how I interpreted certain events, particularly dreams, as synchronistic to my task. A few occurrences even threatened feelings of supranatural evocation! But these records are transcribed in full awareness that human beings can obsess even in pursuit of erroneous mental constructs.

Philosophy and Science long have searched to find the seat of what I call aware entity, often commonly referred to as spirit. For my purposes the word consciousness serves. As to the fate of individual human consciousness after body’s death, there are three main beliefs: (a) one and one’s identity cease altogether to exist; (b) one retains his or her unique life identity and proceeds to eternal existence of variously conceived sorts; or (c) one is incarnated repeatedly (either arbitrarily or into a chosen milieu), but absent conscious recall of prior incarnations. As to the last, is it possible that in the catacombs of my current psyche there is a residue of all laughter ‘I’ have laughed and all tears that ‘I’ have shed?—one permanent, anonymous entity born and reborn within gravity’s bed?

In the closed cosmological system I was given to envision, theory (c) is tenable—that indestructible seeds of consciousness are re-used, as is energy of
which all matter is constituted; that the present “I” of this body has been born repeatedly, to take forms dictated by material inheritance and shaped by conditioning imposed by chanced circumstances. Nowhere is the concept of anonymous reincarnation of one aware entity made more tantalizable than by dreaming. Some indications have been advanced of conscious recall of prior existence[s], but I am far from firm in the belief. The dreams recounted here don’t presume to substantiate any theory; they simply are an exploration of how Psyche can continue waking work. Working with my own dreams did cement belief in me, however, that no hearer can possess enough experiential knowledge about another’s private history to analyze the other’s dreams. Only the dreamer, I’m convinced, can extract usefulness from his or her own dream dramas.

Years ago I had thought to write a book one day about dreaming, and over time regularly recorded my dreams and consciously-arising waking associations and/or actions. Many dreams that roiled domestic life, of no general interest, were expunged from the last stack. Those retained, which follow here, offered self-absorbing demonstrations of Psyche’s delving into subjects of now-completed writings—foremost, besides A Child’s Book of Light, are the trilogy of History of the Daughters, Jesus’ Beloved Disciple, and Delilah, toward unification in the field of Religion.

Three things remain to be said…

Initially should be mentioned that, beginning with the death of my sister-in-law September 2012, Domestic-I astonishedly was free of a dozen years full of family caregiving to ends-of-lives. Time was there for Writer-I as never before! And, what happened? She was blocked—completely. Here was all of time for which she had pined; instead, day after day mind was embroiled in Ego’s remembrances of things past, a paralyzing lethargy of futility. As Jung pointed out, nothing can be accomplished without Ego.

Finally, day before yesterday, before sleep that night I used my old yogic meditation. This is stupid, I told the subconscious. Tomorrow you will set yourself to wri1ng without ego interference! It took a bit of conscious willing yesterday, but I was able to and did begin work on this manuscript. The headway made was small but enough to retire contented as I had not been able, for a long time. Then, yesterday, three elementary thought conclusions broke through.

The first resulted from my having that night much of the same unclear dreaming experienced as I age, which I have considered is due to a natural drying-out of brain. Nonetheless I spent some time searching recall, was able to call up some fragments, and recognized that in some fragmentary dreamings ‘the I’ does not ‘marry’ with the dreams’ protagonists, who in such dreams seem varying selves in strangely vague situations. That seeming deepening progression of my dreaming does beckon a strengthening of the concept; that this “I” has lived prior human lives, with residues of their experiencing capable of worming their way up from the old brain into present working mind.

The second fundamental conclusion gelled this morning. During my first hours of sleep from near midnight to 6:00 a.m., I slept soundly with dreaming of the above type. Not ready to get up, during another hour of sleep I had a totally personal recallable dream. Immediately on awakening I spoke it to the cat that sleeps right up against my body. There is no point to giving that dream’s details, for one would need to know the entire private history in this incarnation. Salient is how it led me through every subjective quandary of this self vis-à-vis fated circumstances.

I was ecstatic! I could follow the tale objectively; admit my vulnerabilities; see how I had striven to manage the family householder’s bailiwick; and, most importantly, how I had done my best, acting purely in accordance with a circumstantially applied nature. Until then, Ego had been tormented by sad doubts that would force sadness into, and tears from conscious brain. What a great feeling, to come to terms in Mind with Personae.

Lastly of the three elements, the prior evening I had watched a Front Line documentary of the terrible sufferings occurring between Alawites and Sunnis in a valley of Syria divided by the Orontes River. Those two agricultural populations, one on each side of the river, had lived in peace before the uprising but, over the revolutionary interim, been caught in pro-military and freedom fightings, apparently complicated by infiltration of self-interested foreign terrorists.

I do not know who were the persons placed in and recording the horrors of people just like you and me. The scenes were the most difficult I ever have watched: shelling of humble homes where families barely were able to keep any life together at all; frantic digging out of bodies; persons with lost limbs; blood everywhere; and the most minimum of equipment for aid. One scene will stay with me always: a little boy, whose grandparents were buried in the rubble of their poor abode. He could not stop crying and screaming—“My grandma and grandpa are in there!” And the other children, bloody faces and shocked eyes; mothers crying for their lost ones…

My god…. And nothing—nothing that can be done about it? All the talk over all the media; nothing one individual can do, against the inexorable plying of human history. Yes, I know that. But what came to me, in the form of what our ancient East described as “a concrete visualization,” I understood as never before precisely why human beings have needed—still need—to believe in a god. It is only if one is secure in life and living that one can be aesthetic, a luxury in itself.

Thirty-two years ago, however, the subjects then engulfing thought caused a perturbation of Mind which, per Webster, was the very definition of the word: “a disturbance of [its] regular ellipse [and] other motions of [its] body, produced by some force additional to that which causes its regular motion.”

Was I dreaming also when I was awake:
just self-serving ideas from dreams to take?
No matter!
Dreams led the ‘I’ where forcedly bound—
posturer or heretic, through light and sound….