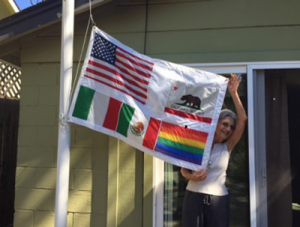 For All of Us

The flag seen above flies free above this 83-year-old’s modest home property in ‘District of Springs’, County of Sonoma, State of California, Nation of North America. It embraces living contributions, including my own ancestral cultural heritage, to the halcyonic life here pursuable due to regional settling and its’ ongoing populace’s labor, in accord with incontrovertible beliefs in the basic principles upon which our parent nation was and was to remain founded: that all human beings “are created” equal. For isn’t it so? LIFE-PER-SE is born to anticipate good living? 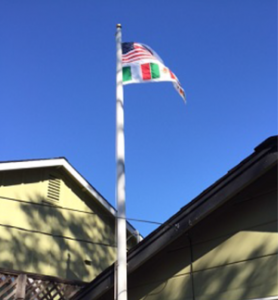 It isn’t easy, being US—we, among all earthly Animal Kingdom the only-evidenced possessors of conscious Self-awareness and reasoning. We are aware, of some 5,000 recorded years of Humankind civilizationing and socializationing– repeating tidal waves of strife and warrings. We are given to wonder: must Humankind endure yet another “dark age,” before resurge of the stream of enlightenment?

‘Empire’ through ‘empire’, ‘country’ through ‘country’; ascent through descent; dynastically monarchical to republic–Time has wrought comprehension what it truly means, that each human being is one of an entire human family irrespective upon which piece of Earth its’ cultural commonweal or thus-far-developed governance thereon.

Envisionable are many more flags reflecting joined peoples agreeing with and believing in fundamental moral and ethical principles of human conduct established and followed upon their land: rights to “Life, Liberty, and Pursuit of Happiness” under a government for and by Its’ peoples–individual emanations from around Earth, for whom Citizen- status wears no ethnicities.

We dream of a multiple of such flags of growing unifications under our states and nation; and, ultimately, further: one flag, showing all parts of Earth and its’ peoples’ existences, from which our Union has drawn and continues to draw. It, however, would need to be a size accommodatable only by our national Capitol’s dome!

(With thanks to Lisa and her former, fantastic Flag Emporium, for rendering our design artfully in fabric….)