Genesis III is a futuristic novella. Earth has reached the point of nuclear annihilation, at which moment a young man from a neighboring planet has vehicle failure and crashes in a high mountain valley. At the same time, a middle-aged woman in Washington, D.C. (part of a throng waiting for the final word on the hostilities) and a middle-aged vintner on the other side of the nation, find themselves lifted into the empyrean and awaken to encounter the alien astronaut (The Younger) and a female child.

Together they form a family, finding a homestead ostensibly fitted for human survival. Never venturing beyond their small mountain valley, the ultimate question that Grandma JC and Grandpa JC are to consider: Will The Younger and the then-grown Little JC begin life anew? Should humankind recreate itself?

Here is an excerpt from this novella:

I can see the headline now, was JC the Younger’s first thought…‘Death Between Two Worlds!’; but he was too well disciplined to court surging emotion. He flipped open the emergency analysis panel and entered the initiation code. The words, Preliminary Test, lighted instantly and a scant five seconds later the dismal results scrolled the screen—prime chip failure! Brice, the mission’s tecky eagle, had used just 12 words, and only once, for “that one-in-a-million possibility we don’t waste time worrying about.”

Self-control and perfect piloting were the main reasons The Younger got certified for interplanetary flight at age 16. Data input at 5000 bytes a minute was another. Marhlo, the mission chief, first had enlisted the Younger in producing a new edition of the QUARC manual. He had no need to reach for the slim pod that held it. One needed to read mission failure procedure only once. 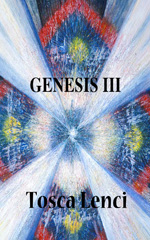